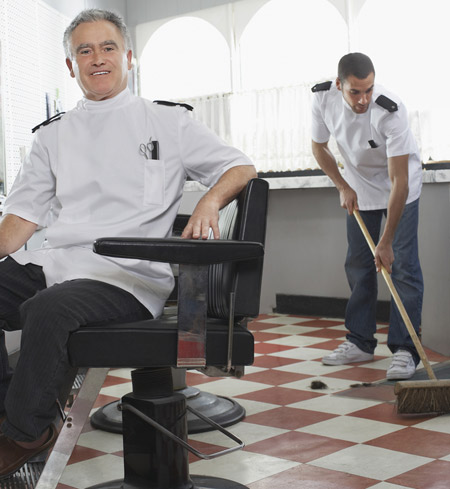 If you’re interested in becoming a barber, you have more options for learning the craft than you might think. You can opt for barber school, often through a cosmetology school. In most states you can apply to be a barber apprentice. As an apprentice, you can work directly with a master barber to learn the ins and outs of becoming a barber yourself.

Barbering as a Career Choice

It’s easy to think of a barber as just the guy down at the corner shop who trims the hair of their male clients. Historically speaking, barbers used to do a lot more than just give shaves and haircuts. Today they don’t perform surgery or pull teeth, but they definitely do more than just cut hair.

Professional barbers today offer custom shaving services. They may offer massages for the scalp and neck. They’re experts in all things regarding their clients’ faces and hair. Being a barber is a big deal indeed.

Years and years ago, barber schools weren’t really something that people worried about. A person, usually a man, who wanted to be a barber went to the barber in town and apprenticed with him. An apprenticeship meant that you followed someone around and learned how they do their job.

Does Barber Apprenticeship Work in Some States But Not Others?

Because barbering apprenticeships are handled at the state level, there are some big differences from one state to another.

On the other hand, Oklahoma also requires a barber apprentice to meet his requirements in two years. During those two years, he must log three thousand hours of work and training. It’s his responsibility to maintain those logs, and the apprenticeship cannot transfer to another barber. If the apprentice and the barber go their separate ways, the apprentice must start all over again.

How to Find a Barber Apprenticeship

Finding a barber apprenticeship can be easy or difficult depending on a variety of factors.

The biggest hurdle is that you must be of age to begin apprenticing. Most states require that the barber apprentice is at least 16, but that may be different depending on location. From there, potential apprentices simply need to ask a barber if he is willing to allow the apprentice to work with him.

Remember that this is a huge commitment on the part of the barber since some apprenticeships can last up to two years. You’ll also need to keep detailed records of everything that the state board of cosmetology requires for the apprenticeship.

At the end of the apprenticeship, you’ll be able to take, and hopefully pass, the licensing exam to become a full-fledged barber.

Barber apprenticeship jobs are only as plentiful as the number of barbers willing to work with apprentices.

Barbering is a growing profession, though, with the Bureau of Labor Statistics estimating overall growth for the field at 13 percent.

This also varies according to location, however, since some areas of the country are flush with barbering professionals. Others, though, are in dire need of people who are interested in this career path.

Metropolitan areas tend to have higher concentrations of barbers, while more rural areas are more likely to have immediate need.

States with high amounts of barbers include New York, California, Texas, and Georgia according to the Bureau of Labor Statistics.

Barber apprentices are likely to earn minimum wage for the duration of their apprenticeship. This can vary from one barber shop to another.

Most barbers have no real limit to their income potential. They can set their own pricing depending on what the market will accept and what their own skill levels can support.

A popular and talented barber can earn a lot. Barbers working for someone else in a shop can earn a starting salary of $28,000 to $30,000. It depends on his location, according to the Bureau of Labor Statistics.

Barbering is very much a field in which entrepreneurs do well. Having the ability to self-motivate and a propensity to work well with others are good traits for someone who wants to become a barber.

Whether you choose to go with a barber apprenticeship or barber school, you’ll learn the technical skills that you need in order to become a successful barber.