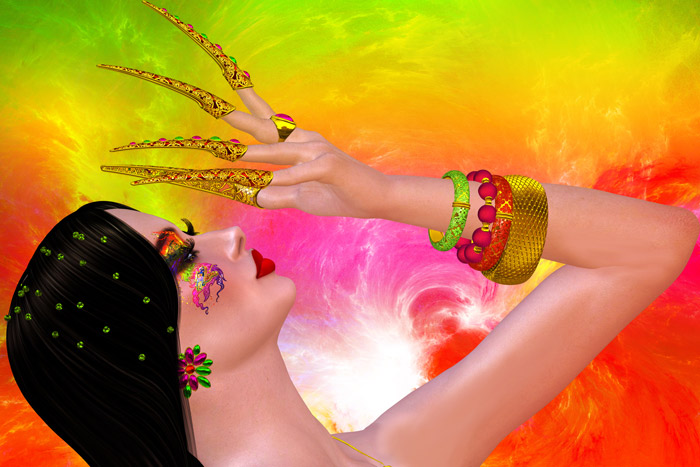 As with mastering any craft, knowing its origins and evolution is part of a complete appreciation of the process as an art form. With a good knowledge of its essence and techniques learned in school, the artist’s ability to express herself can be enhanced.

In recent years nail technicians have become more than just employees of the beauty industry — they have become artists pushing boundaries in the realm of nail art. Amazingly, the simple green and black marks of a warrior’s nails have evolved into intricate pieces of art on the human body. Consider this your unofficial nail tech continuing education class. 🙂

For over 5000 years, nail technicians have helped both men and women with the maintenance of their nails. Having well-kept nails marked proper grooming and reflected high social status.

In ancient Egypt, women would polish their nails and color them with henna of different colors indicating different social statuses. The colors chosen by those in power were exclusive to them. Average citizens were not permitted to use the reds used by the queens.

A similar situation was paralleled in China, where officials and those of high social status sported long nails. However, unlike Egypt, those of the most elevated social status in China decorated their nails with gold and silver. Those ranking below them used black and red. Commoners in China were only permitted to use pale tones. The weak colors were a reflection of their lack of power.

In both China and Egypt, nobles used solid gold tools for nail care — a true mark of luxury and supremacy.

In other parts of the world, warriors decorated their nails with sharpened wooden sticks and natural dyes. This was a form of war paint used for battle.

The concept of manicures did not become popular in America until the beginning of the 19th century. It began with short, almond-shaped nails trimmed and shaped by metal scissors, various other tools, and acids.

The technology evolved with the creation of what is now the modern-day nail file, when a doctor — Sitts — introduced an orange tree file to his patients’ nails. You could even call Sitts medical nail tech as a joke. Continuing the legacy, his niece popularized what is known as the “Sitts Method” and opened salons staffed with nail technicians. By making nail care accessible to the masses, women of all income levels started getting nail care.

The Barber Supply of America helped to further popularize this growing vocation by holding its first convention for nail technology in the early 1900s. Nail care took off at the beginning of the 20th century when it was glamorized and publicized by Hollywood. With the increase in demand came the growth of techniques and tools.

Nail polish started as dyes made of henna and other natural materials in China. It then evolved into paint made of wax, egg whites, gelatin, and rubber. However, the name “nail polish” originated from one of France’s first commercial nail salons. Using creams, tinted oils, and powders to clean and buff nails to a shine, the act of polishing gave nail polish its name.

The first liquid nail polish came with the invention of the car. Inspired by automobile paint, Cutex used its main ingredient — nitrocellulose — to create nail polish in 1916. This trend caught on, and Revlon established itself as a nail polish brand by creating pigmented nail polish. This unlocked a spectrum of new shades by using pigments instead of dyes.

With the roaring 20s, nail care became an art form. Many innovations were made during this time. For instance, a manicuring kit that contained nail polish, a cuticle remover, nail whitener, an orange stick, and an emery board was introduced. Having access to this kit helped women to hone their craft at home. In addition, it opened the doors for women to become licensed nail technicians.

After 50 years, however, these artists were not satisfied with just painting their human canvasses. Instead, they wanted to add more to it. This led to the rise of artificial nails in the early 1970s.

The first attempt at artificial nails was possibly during the Ming Dynasty in China. They used fingertips made out of precious metals to extend nails. Royalty wanted to emphasize the length of their nails. This reflected their extended reach of power over the kingdom.

Egyptian royalty also created long nails as an indication of how they did not have to engage in manual labor or lift a finger – they would break a nail otherwise.

Interestingly, the first artificial nail was created for function rather than beauty. Upon breaking his nail at work, dentist Frederick Stack created a faux nail out of aluminum foil and dental acrylic. He later introduced this to the beauty world after collaborating with his brother to patent the first acrylic nails. These nails were fashioned using dental drills and then attached to normal nails.

Later on, another doctor would invent the liquid and powder system now used to create acrylics. Artificial nails were created to look natural in the past. Nowadays, though, many clients come in seeking alternate looks. As a result, nail artists have taken the creation of artificial nail designs to new heights using nail jewelry, gemstones, and even succulents.

With the constant evolution of trends, the artificial nail has also been a trend that has transformed over time.

One trend in the early to mid-1900s was the half-moon manicure. The moon manicure involved women keeping their nails long but filed into an oval shape. Paint was applied to all but the crescent base. Sometimes the tip was unpainted or painted with a lighter color.

In the late 30s and 40s, women began leaving only the crescent base bare, giving rise to the name “half-moon manicure.” Some women still enjoy this look to this day for reasons of both form and functionality. They say that nail polish usually begins peeling from the base of the nail. In this way, the half-moon manicure increases its durability.

With this flourishing and constantly evolving industry has come a spectrum of colors, looks, and techniques. Possibilities are endless and are only limited by imagination. Nail technicians have truly become artists in this world of art on human canvases.