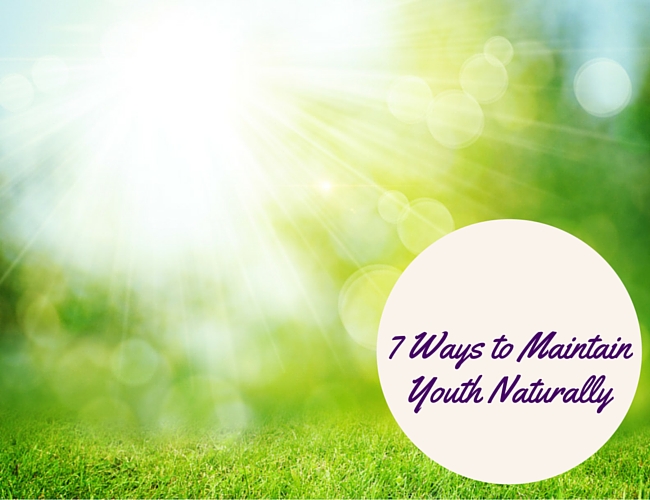 No matter your age, or what your current health and fitness levels are, you can always turn back the clock on the aging process and enhance your natural youthful beauty. You could do it by improving your outward appearance through help from estheticians or other beauty professionals or through good hypoallergenic makeup, or maybe you could do it by taking care of cardiovascular factors such as high cholesterol and high blood pressure.

Many people like the idea of maintaining youth naturally so we’ve put together a list of 7 ways to do just that. Let’s take a look…

1. Don’t be a couch potato – move that body! Aside from helping you lose weight, tone your muscles, and build healthier bones, regular exercise like swimming and cycling can also help you think more clearly. Studies by the National Institute on Aging showed a connection between improved brain power and physical exercise. Walking — which is a fantastic form of exercise — for just 10 minutes a day lowers your risk of Alzheimer’s by 40 percent, says Gary Small, MD, director of the UCLA Center on Aging and coauthor of The Healthy Brain Kit. If you are looking for a slightly more vigorous form of exercise, rowing machines are highly recommended as they allow for an excellent workout, yet are very low impact. There are plenty to choose from, and good quality models will only cost you around $30-$500. The vibrant health that comes from a sensible exercise regimen also makes you more beautiful in an inside-out kind of way.

2. Get into yoga. “Yoga means ‘union’ in Sanskrit,” says Cyndi Lee, founder of New York City’s Om Yoga and a FITNESS advisory board member. “Through conscious yoga breathing, you become aware of the connection between mind and body.” This means greater anti-aging benefits not to mention the countless other yoga benefits such as the beauty of a better posture, more energy, less stress, improved complexion, and mood enhancement. Lee also added that, unlike other exercise routines, yoga poses are created to work your body within and not just on the outside and that really aids in rejuvenating the digestive system, immune system as well as the reproductive system.

Get started with yoga to experience its benefits first-hand.

3. Perform some mental aerobics. One study published in Journal of the American Medical Association demonstrates that certain brain exercises could, in fact, minimize or even prevent cognitive deceleration, and its advantages could actually last for as long as 5 years. In some research it’s been discovered that a 2-week program of mental training could actually rewire the brain. The study says that they’ve “seen evidence on brain scans that memory improves.”

4. Give yourself that much needed break. Studies have found that stress causes some physical changes which could speed up the aging process. The most effective method to stop this negative effect is meditation. This is what Dr. Herbert Benson, M.D. author of the landmark book The Relaxation Response and a founder and director-emeritus of the Benson-Henry Institute for Mind Body Medicine in Boston, calls the “relaxation response”. The protocol involves repeating a mantra—which is a sacred phrase, word, prayer or sound for a minimum of 10 minutes per day. A study in 2005 performed at Massachusetts General Hospital in Boston demonstrated that meditation helped in preventing age-related symptoms in the brain.

5. Drink red wine. Researchers are continually working on improving the potency of resveratrol to develop the ideal supplement which contains just the right amount of the substance. For now, though, there is some evidence to support the notion that even just a little red wine could offset numerous health-related problems. There is even some research to suggest that red wine could minimize brain damage caused by stroke by as much as forty percent.

6. Eat more fat. Healthy fat, of course — Omega 3 fatty acids can be found in salmon, seeds and walnut. They help stabilize your mood, help diminish visible signs of the aging process by lessening inflammation, as well as maintain bone strength.

7. Consume green tea. Green tea is renowned for its many health benefits. It is an awesome beverage in that it can block the signaling network which is connected with cancer progression — at least according to Amy Yee, Ph.D., a professor of biochemistry at Tufts University and principal investigator of a cancer study. Also, a Japanese study published in the American Journal of Clinical Nutrition discovered that drinking at least one cup per day can help keep your brain sharp as you get older.